I went to the pump track in Akaigawa Village on the last day of August. That’s where the Japanese qualifier for the Red Bull Pump Track World Championship was held.

(Read through to the end if you enjoy tech stuff, or just watch the clip below if you don’t care)

That event two years ago was not only a vivid showdown of how basic skills matter in bicycle sports (or the action sports side thereof) but also a major turning point in my bike riding career. I had been decently acknowledged and confident about such skills through riding trials, street, slaloms and downhills, but I got defeated. Miserably.

The key to riding these pump tracks in a skilled, fun, and fast manner is “pumping” over the bumps on the course. It’s very similar to how you ride swings. And when you ride, there are different ways to clear the bumps, including “rolling” with both wheels on the ground, “manualing” with the front wheel afloat (called “rolling” in Japanese English), and “jumping” where both wheels are off the ground. Basically the faster you go, the more manuals and jumps you’d want to incorporate into you riding to make it flow. However, if you don’t have solid basic skill sets, your manuals and jumps will only make you slower.

Two years ago, manuals would only slow me down. Last year, jumping doubles would only help me lose. This time, however, manualing and jumping led to faster laps for both myself and Sawada-kun I rode with, although the measurement was for partial laps and not super accurate.

Now let’s go tech. I’m not quite techy enough about jumping yet, so let’s talk about manuals.

The problem of engine-braking manuals is too common around me, where riders focus too much on lifting the front wheel and end up losing speed, if not looping out. The ultimate point is, don’t lift it – the front wheel will come up once you kick on the backside (downhill side) of the bump to gain speed. Just try to lift less and kick more. If the front end is to far up, there is zero room left for you to kick. Rather, try to maintain the front wheel low, then kick hard, and thy front wheel shalt clear the next peak.

From another perspective, the novice front-lift-oriented approach will have you compress on the uphill ramp of the bump, and it’s only going to slow you down. You want to be decompressing right there.

From yet another perspective, the front wheel should basically roll over the tangent line between the two peaks you are manualing. If lower, you could kick more and make it more awesome. If higher, you can’t kick it. No option but go slow.

So here are some moments captured from above footage that might be helpful.

At the top, entering the manual. You see the front wheel of the bike is actually lower than the trajectory leading up to this point. That means no effort to lift the front end, but some effort to actually lower it. Also as a consequence of the absorption of the uphill ramp, the body position is pretty low. This double is a bit of a step-up so the front wheel is a bit high, but it gets lower on the next set since it’s a step-down. 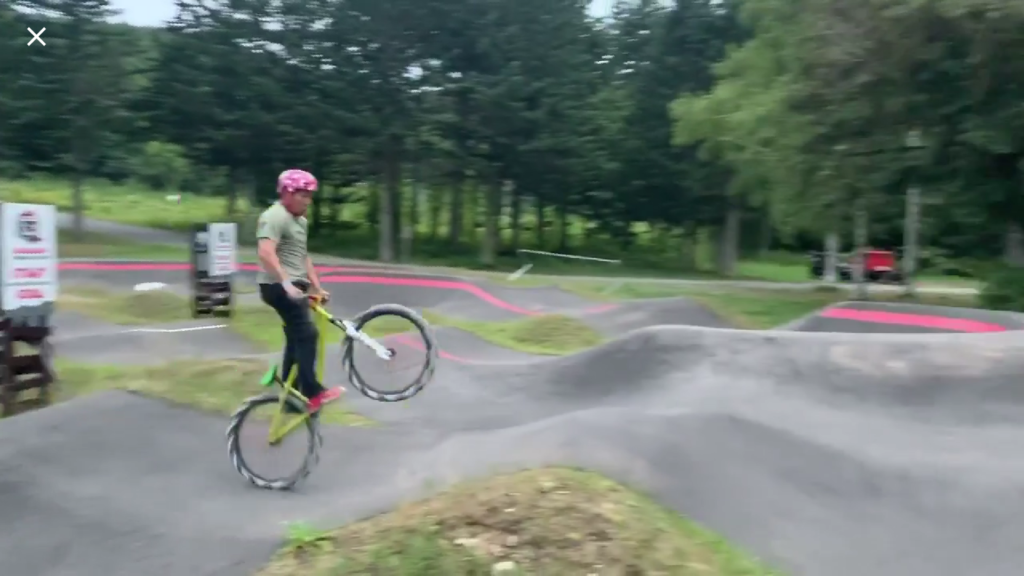 Full extension from the previous point. The triple extension (involving the hip, knee and ankle joints) ensures maximum loading on the downhill ramp, which is precisely THE factor that gives you speed on pump tracks. You basically want to jump over the uphill portion starting here, so it’s important that you are applying some 2G force against the ground at the very bottom right here.

I’ve heard people talking about “stable head height” as a yardstick to measure how well one can pump these tracks, and IDK it might be a useful indicator to beginners, but honestly I can guarantee you it’s not something you’d want to pursue as a goal. It would take too many words to explain or counter-argue it so I’m not going all the way, but you’ll know what’s right and what’s wrong as you keep negotiating the laws of physics and listening to what your body and bike have to say.